A Town of Nature, Traditional Culture, Craftsmanship, and Glasses

Fukui is a town alive with nature, traditional culture, and master craftsmanship. It offers unblemished beautiful scenery, mountains blessed with greenery, fresh streams, and rugged, scenic coastlines created by the raging waters of the Japan Sea. It is alive with traditional culture, such as the many shrines and temples that have long calmed the hearts of the people, and the ancient festivals where locals pray for bumper crops. Its craft culture lives on with quality traditional products including lacquer ware, Japanese paper, and forged knives all lovingly and individually crafted by skilled craftsmen.

In 1905, Shono, located in Asozu-mura, Asuwa-gun in Fukui (currently Shono-cho, Fukui City) was a poor farming village often hidden by snow in the winter months. It was here that the production of Fukui glasses first began. Masunaga Gozaemon and his brother Kohachi inspired to "somehow improve the lives of the people of Shono." That gave rise to the idea of producing glasses to obtain additional income during the snowbound farming off-season. They invited skilled craftsmen from Osaka who taught the villagers the art of glasses production.

With the subsequent popularization of print literature and the growing demand for reading glasses, the production of eye wear began with the Masunaga factory and spread from Fukui City to Sabae City. "Fukui Sabae" soon grew to became a major glasses production area.

1981 marked the beginning of research and development in the production of optical frames using titanium, a light and rigid, allergy free material. Despite the extremely difficult machining process involved, Fukui Sabae succeeded in developing the world's first titanium frames. From this point, Fukui Sabae became the global leader in high tech glasses manufacture.

* Based on 2014 Fukui Prefecture Manufacturers' census. 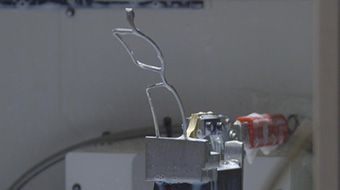 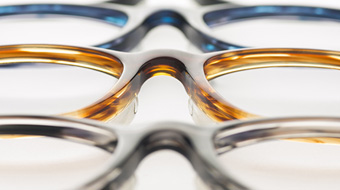 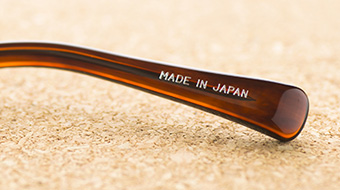 Here, the entire town is one big factory. A few hundred eyewear companies combined efforts go into the production of each pair of glasses.